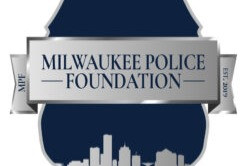 MILWAUKEE, WI – When an individual entered the Milwaukee Police District 5 station on February 25, 2022, and opened fire on the staff, he endangered the safety and well-being of the police officers and civilian employees within the station, as well as the community members in the district lobby. The suspect was arrested and is charged with multiple felonies.

In response to this incident, the Milwaukee Police Department immediately explored options to improve its police district station safety by examining national best practices, surveying its employees, and reaching out to community members and elected officials. Based on feedback and overwhelming community support, MPD is moving forward with installing bullet-resistant glass at its police districts. The citywide safety project cost is estimated at $260,000.

Today, April 12, 2022, the Milwaukee Police Foundation is proud to announce substantial gifts from private entities, led with gifts of $65,000 each from former Milwaukee County Executive Chris Abele, Phoenix Investors and Klein Development. Together with a $65,000 donation from the Police Foundation, these funds will be used to increase police district security throughout the city of Milwaukee. These gifts were facilitated with the coordination and support from Mayor Cavalier Johnson and Milwaukee Police Chief Jeffrey Norman. “I thank the Police Foundation and the people who have stepped up for their concern and their generosity,” Mayor Johnson said. “To make Milwaukee safer, the best way forward is with partnerships. This effort is a solid example of such a partnership.

“Mayor Johnson challenged Dennis Klein and I to step up financially in our efforts to keep Milwaukee’s police officers and citizens safe in our police districts,” said Frank P. Crivello, Founder & Chairman of Phoenix Investors. “Dennis and I were honored to contribute to this necessary project and thank Mayor Johnson for his leadership in forging a public-private partnership with our companies working to keep our city safe.”

“I have long been a supporter of the Milwaukee Police Department before, during and after my time in office,” Chris Abele said. “I understand the value of well-resourced department, and took this

opportunity to help in a way that does not drain their budget. The challenges our department faces today are unprecedented. The need for all of us to be part of the solution is as well.

The safety measures will be installed incrementally throughout Spring 2022.